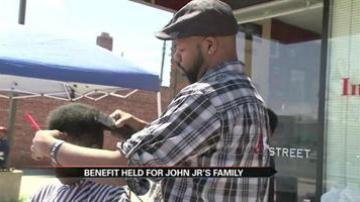 SOUTH BEND, Ind. -- Normally, when you think of anti-violence movements, marches and community meetings come to mind, but how about a barber's chair and a sidewalk?

That's what one South Bend community leader did in order to give kids something to do and put an end to violence happening in his city.

The theme was "South Bend Lives."

He wants to use his platform as a leader in South Bend to motivate youth to get off the streets and be a positive influence on their community.

Using his own money, Lark provided the food, a DJ, and space to dance.

Lark says he had a rough childhood but he didn't let that stop him from getting two college degrees and becoming an entrepreneur.

He says, there's no reason young people living in South Bend can't do the same.

“I want young people to know, they don’t have to be stuck. They can dream," said Lark. "That’s why I did the haircut. South Bend has life. We are not a sad song. But we are a powerful people, a strong people in this community. Black, white, Latino, Asian, biracial, it doesn’t matter. As we come together as a collective whole, we can make some serious changes.”

Lark says one way to reduce the violence is to give kids something to do with their time.

This is a thought echoed by another young man at the event.

Starsky Cook is no stranger to living a dangerous lifestyle, but he was able to find another way before it was too late.

Cook believes more events like this are necessary because not everyone is as lucky as he was.

“At a young age, I started out in a gang. But as I got older and started having children, I realized gang life wasn’t what I wanted,” said Cook. "It’s either early death or early prison and you got a long life to live.”

Lark hopes to make events like this more frequent.