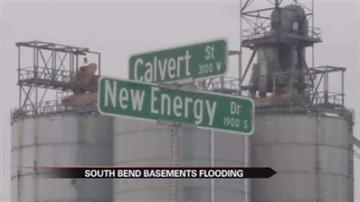 SOUTH BEND, Ind. --  The ethanol plant in Rum Village used to pump thousands of gallons of water out of the ground every day.  Since its been closed, homes in the area have experienced flooding problems.

On February 5, 2013, the plant was sold to a liquidator which means the pumps will not be turned back on.

Fans, shop vacs, water pumps, and even charcoal.  People on West Calvert are doing everything they can to stop the constant basement flooding.

"It's insane, it's driving us crazy. We spend more time cleaning the basement than we do anything else."

Kevin Taylor says the recent flooding is destroying his home.  And now the mildew left behind is jeopardizing their health.

Taylor and over fifty others packed into the Rum Village Nature Center on Thursday, February 7, searching for answers, desperate for help.

Mayor Buttigieg was not in attendance but the Mayor's office did offer contact information for a lawyer who will help the homeowners pro-bono.

"This attorney needs to look into the insurance policy of the homebuilders who built your homes," explained the Mayor's Chief of Staff, Mike Schmul.

But that wasn't enough for fed up residents who left a fifth public meeting without a single answer or resolution from the city.

At one point, homeowners asked public works to step in and build wells and pumps, they said they simply can't find the money in the budget.

Now, the issue lies in the hands of the Mayor.

An eager council and a frustrated neighborhood await a response.