Bats cause a rabies scare in Mishawaka 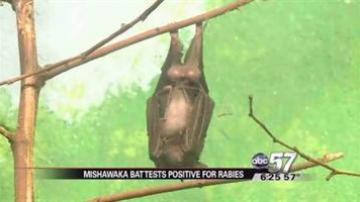 ST. JOSEPH COUNTY, Ind. -- Halloween is right around the corner and your kids are probably safe from ghouls and goblins, but you may want to keep them far away from bats.

"We have had quite a few rabid bats in the area, said Critter Gitter Owner Jim Sheffield."

This year alone the St. Joseph County  Humane Society reported three bats that tested positive for rabies.  One of these cases was reported this week in a Mishawaka home in the Central Park area.  Awesome Critter Gitter owner Jim Sheffield says bats are nothing to take lightly.

"They are very dangerous.  Probably the common danger is of course them touching you, but the second most common danger I feel is people wanting to release bats", said Sheffield.

Sheffield says that even if a bat only touches you, you can still become exposed to the rabies virus.

"If the bat has touched someone or a pet in your home, the pet should be contained and then taken to the local county health department for a rabies test", said Sheffield.

Potowatomi Zoo zookeeper Emily McClelland says even though she did have to undergo a series of rabies vaccinations before handling the bats, typically bats do not attack humans.

"Your chances of being bit by a bat are pretty much if you are messing with it, you find an animal down on the ground or find a place that they are roosting and disturb them then the bat is going to bite you", said McClelland.