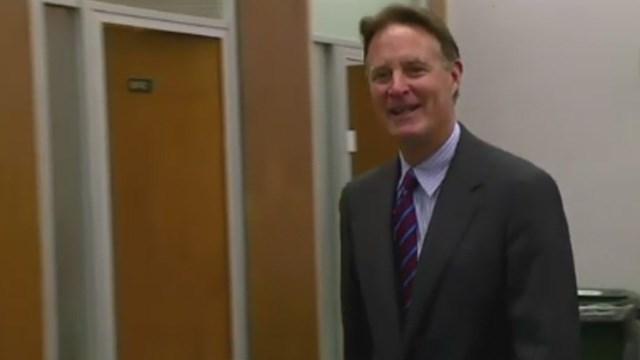 (CNN) -- Former U.S. Sen. Evan Bayh announced Wednesday he will run to retake the seat he vacated six years ago, improving Democrats' chances of winning back the Senate in November.

"With the challenges facing Indiana and our country, I can no longer sit on the sidelines and watch as partisan bickering grinds Washington to a halt. Hoosier families deserve more and I've decided to run to take their cause to the U.S. Senate," Bayh said in a statement announcing his bid.

Bayh enters the race with close to $10 million in campaign cash, along with strong support in Indiana from his long run as a centrist governor and senator. But he will face off against a more centrist Republican, Rep. Todd Young, who bested his tea party opposition in a May primary.

The decision from Bayh comes after a year of intense lobbying from New York Democratic Sen. Chuck Schumer -- the incoming Senate Democratic Leader -- and acts as something of a counterbalance to Sen. Marco Rubio, who pushed Florida further into the Republican column after Senate Majority Leader Mitch McConnell successfully lobbied him to reconsider his vow to not run for re-election.

To win the Senate, Democrats need to pick up four seats in November if Hillary Clinton wins the White House and five if Donald Trump wins.

It also marks an ironic reversal for Bayh -- he left Democrats in a bind in 2010 when he announced he was retiring after already securing a spot on the ballot. Now, Hill had to vacate his spot on the ballot for Bayh.

Critics on the left and right have pointed out the stunning about-face from Bayh, who dramatically left the race in 2010 as it was clear tea partiers would help lift Republicans to broad victories, saying he could no longer bear the partisanship in Washington.

After six years, working at times as a political consultant and Fox News contributor, Bayh said Wednesday he was ready to return to the Senate, leaning on a line used often by Republicans and Democrats from the conservative state.

"It's time for Indiana common sense -- the principle that guided my work as governor, when we crossed the aisle to cut taxes, reform welfare and create a scholarship program to help Hoosier families afford college," Bayh said Wednesday.