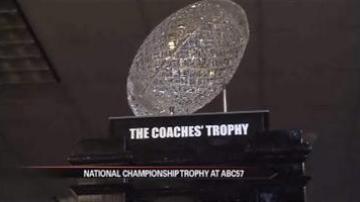 SOUTH BEND, Ind. -- The BCS National Championship Trophy is on a media blitz as three still undefeated teams, including Notre Dame, fight to bring it home as national champions.

"As far as price wise, it is more expensive than the Lombardi Trophy, which is valued at $25,000," said Ryan Kasmiersky, trophy handler.

A $30,000 masterpiece that millions of sports fans admire made it's way to ABC 57 Wednesday.

ABC57 News talked to the man who's sole job is to manage the trophy's cross country tour.

If only this crystal ball could predict the future of college football. Who would it choose as champions? Where would the one of kind BCS trophy call home?

"There is no where more that people would want this trophy than in South Bend, said Kasmiersky. "It takes three to four months to make and if they mess up they have to do it again by hand."

Hand made in Ireland, fitting that it may soon find itself in the hands of the Fighting Irish.

"It's the season I have been waiting for since i got here," said Baxton Cave, Irish Center.

Defensive stand out Manti T'eo wants it for the team even more than a Heisman for himself.

Hopeful, Yet careful not to jinx it.

"That is one thing this football team has done, we don't look ahead cause if you want to win every game you have to take the next game at hand and wake forest is the next game," said Kapron Lewis Moore, Irish defensive end.

And no one gets to touch it.

"This is the only trophy for this year," said Kasmiersky.