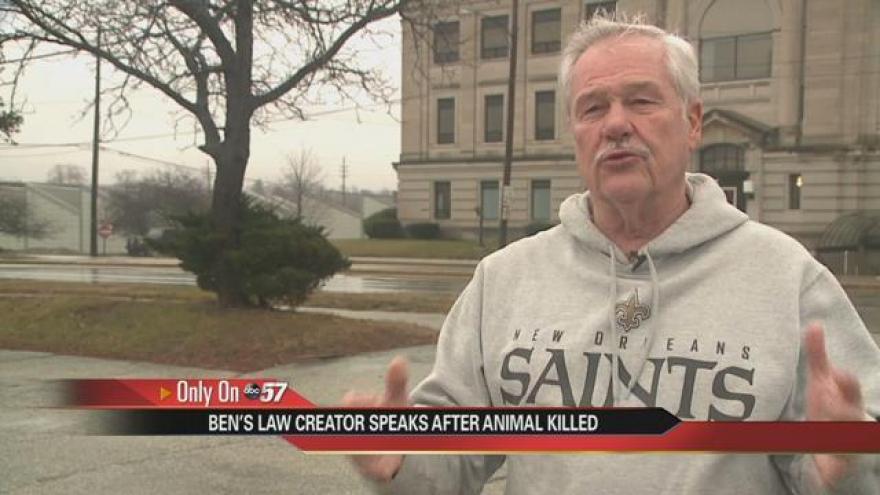 In 2009, an Indiana State Senator helped pass a law that made killing a domestic animal, a Level 6 felony.

It was named Ben’s Law, after a draft horse named Ben was shot and killed in La Porte County.

Now the law is in the spotlight again after a pet donkey named Jack was killed, late Sunday night.

Retired Senator Jim Arnold says he wishes the law didn't have to be used in the first place but he’s happy his work didn't go to waste.

“When I think back and think you know what if this hadn’t been instituted this gentleman probably would have not been charged because there was no law against him so yeah satisfaction for the fact that a law I crafted downstate is now implemented and going to be use,” said Arnold.

Abromavicious faces 6 months to 2 and a half years behind bars for domestic violence animal cruelty, a Level 6 felony.

In 2009, Arnold, an animal lover himself, helped draft a bill making this type of animal cruelty a Level 6 felony.

Tuesday afternoon, Arnold spoke only to ABC 57 News and said he hopes Abromavicious gets the max sentence.

“I am hoping this individual whatever court, whatever judge he goes before I hope they fully institute the law up to 2 and a half years and a maximum fine we cannot allow people because they're frustrated because they get in a fight with their wife girlfriend and go out and destroy their animal for some unknown reason, totally unacceptable in our society,” said Arnold.

Abromavicious is also facing a domestic battery charge for allegedly slapping his girlfriend.

His next court appearance is set for January 30.