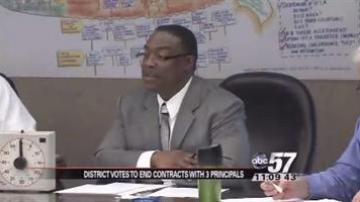 The board had to decide on whether to keep three principals on staff and the group ended up letting them go.

“Actually it is disappointing. I have enjoyed my time here. Like I said there will still be students that are attached to my hip as well as my heart," said Martin Luther King Academy Principal Freddie McGee.

The Benton Harbor Education Board voted unanimously not to renew the contracts of former principals, Perry Davis, whose school is closing, and Gezel Floyd who took a job as a teacher.

But when it came down to vote on Martin Luther King Academy Principal Freddie McGee’s contract, not everyone agreed.

Two of the six voted against letting him go, including Board secretary Sharon James. She says losing McGee will be a huge loss for the district.

Superintendent Leonard Seawood says he too is sad to see McGee go.

“It has nothing to do with Mr. McGee. He is a wonderful professional. If you look at his record in the district, unblemished," said Seawood.

But he says the district’s dire financial situation forced the board to restructure.

“We have closed about 40 percent of our buildings," said Seawood.

“We have cut about $4.5 million in operating costs," said Seawood.