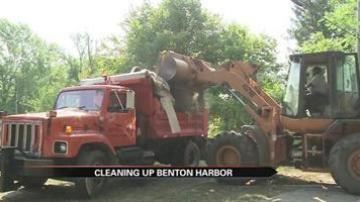 BENTON HARBOR, Mich. -- Last week, some residents were using a lot on Pavone Street, as a landfill.  Once ABC 57 started asking questions, residents finally got some answers. The City of Benton Harbor pulled out big machinery and dumped the trash where it belongs.

The emergency financial manager, Tony Saunders, says prior to seeing the story that ran on ABC 57, he was never told how bad the situation was.

Neighbors appreciate the city finally cleaning up, but for them, the problem is far from over.

The abandoned home next to the lot is owned by Dorothy King. Her insurance company was supposed to cover demolition costs but city officials say the city has not seen a dime.

The city may have to sue, but that  will not solve the problem of some abandoned lots turning  into landfills.
Share this article: