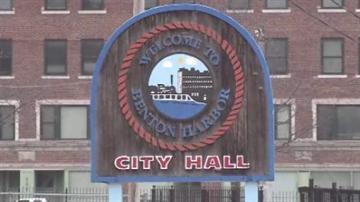 BENTON HARBOR, Mich. -- Benton Harbor will soon be getting a new emergency financial manager to oversee the city’s financial crisis.

According to current emergency manager Joseph Harris, he’s being forced out by the state after repeated pressure from local city officials to have him removed.

Disgruntled residents and heated public meetings over taxes and public safety funds ended in failed attempts to reach a solution. Now, it has sparked some drastic changes in the city.

Benton Harbor’s financial crisis is nothing new. From a general fund that’s belly up, to being unable to fund its own police and fire department, to recent mandatory furloughs.

Three years ago, the city brought in Joseph Harris to make tough cuts, but that didn’t come without criticism.

"Mr. Harris has condemned himself and has shown he is unworthy to continue," said Benton Harbor city commissioner Marcus Muhammad.

Tuesday, the state treasurer came in to town to help find a solution. City leaders say hours of meetings and phone calls ended with the decision to bring in new leadership.

"His departure is imminent, when exactly that will be, well, the lone board and the state treasurer will have to make that determination," said Muhammad.

Harris claims the city only agreed to the terms around increasing property taxes to help city funds if the state removed him.

But Muhammad said there was no such deal.

Harris’ replacement will be named by the state. In the meantime, the state has asked county treasurer Bret Witkowski to be an adviser, overseeing the city’s finances during the transition.

"My role would be to assist the emergency financial manager, looking over things, understanding pitfalls and question marks they need to answer," said Witkowski.

Unlike Harris, Witkowski has the support of local leaders.

"He has been not on the peripheral, but on the inside since its inception, so I think it only wise and prudent that he see it through," said Muhammad.

ABC 57 reached out to Harris to get his reaction to what city leaders had to say, but were unable to reach him.