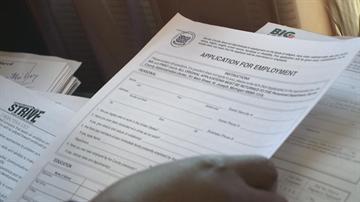 BENTON HARBOR, Mich. - On this Labor Day many of us have a day off of work but some of us would give anything to be working. Monday ABC 57 News took an inside look at the least employable people in society, ex-convicts.

“Why can’t these people just give me a chance, a second chance?” said 61-year-old Shelley Davis from Benton Harbor.

In 2002 Davis was arrested and convicted for selling cocaine and heroin. Davis said she never used the drugs but sold them for the quick money. Davis served 18 months in federal prison for the crime and since being released in 2003 hasn’t gone back to crime, but hasn’t had a steady source of income.

According to the United States Department of Justice, there are more than two million people in jail and almost all of them will return to the community they came from. The majority leave without a job and a red flag on their resume.

Davis thumbed through a mound of applications Monday that she’ll fill out and turn in. Davis hasn’t worked for more than three years and has only had a handful of interviews. She said the felony on her record has turned people off. “It’s been a rocky road,” Davis said.

Determined to stay on the right path, Davis took online classes in business management volunteered at her church enough to be voted ‘Woman of the Year’ by the congregation in 2007. In July Davis received her bachelor’s degree. “I’m so proud of it,” she said.

Despite her efforts Davis has remained unemployed.

According to the Department of Justice a job might be the most important part of ex-prisoners staying out of trouble. A study by the DOJ shows that 50% of released prisoners that do not have a job will be back behind bars but 93% that are working stay out of trouble.

“Sometimes I wonder if it’s too late,” said Davis “But it’s never too late.” She said she’s not a statistic, she’s not going back to crime and drugs but is hoping someone gives her a chance. “I would give anything to have a job, to get up in the morning and go back to work.”