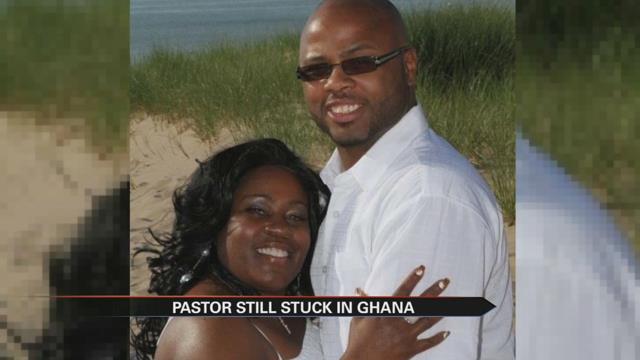 Benton Harbor resident Roy Barry is still trapped in Ghana more than six months after being arrested for human trafficking.

“I miss everything about him,” Kim Barry said of her husband, fighting back tears. “I just want my husband home.”

Barry’s tears are still flowing months after we first interviewed her because her husband remains in Ghana after being charged.

“I’ve been a prosecutor, I’ve been a defense attorney, I’ve been a private practitioner now 40-some years; I’ve never seen a case quite like this,” Barry family lawyer John Smietanka said.

Roy Barry traveled to the West Africa country in September of 2015 to pick up his wife’s 6-year-old goddaughter, Angel. She was going to come visit America for three weeks.

The Benton Harbor family had befriended her Ghanaian family after meeting on Facebook in 2013 and bonding over their faith.

Smietanka said every person close to the little girl supported her making the trip.

“The headmaster of the school, the mother, the guardian [mom’s significant other], the natural father all say it’s a great thing for [Angel] to come to America, have an experience, and come back [to Ghana],” Smietanka said. “That’s not human trafficking. Where they get this idea, God only knows.”

But that’s exactly what Barry was charged with when he brought Angel to the American Consulate in Ghana to get her a travel visa.

The little girl was taken away by the government when Barry was arrested, and her family does not know where she is to this very day.

As for Barry, he is still trapped in Ghana.

His trial has been postponed at least eight times for reasons Smietanka can only describe as “bizarre.”

Barry’s most recent hearing was scheduled for March 9.

The hearing is now scheduled for March 31.

Stuck in a jam, Kim Barry said her husband has turned his love of religion into his passion while in Ghana.

“He’s ministering to seven churches…he has been teaching Sunday school, he has started a ministry group called ‘Training Champions 4 Jesus Christ,’” Barry said. “They all love him down there! And he’s doing the best that he can do.”

But back here in Michigan, Kim is battling a rare lung disorder called relapsing polychondritis.

She’s been hospitalized twice since Roy left for Ghana and her doctors now tell her she needs surgery.

“I need my husband home for that because he has to make important decisions based on my life,” Barry said.

With no end in sight, Kim and her family are turning to the one constant they still have – their faith.

“I truly believe that Roy will be home,” Kim said. “But it’s all on God’s timing.”

Roy Barry has no previous criminal record. His trip to Ghana was his first trip out of the United States and his first time flying.

Smietanka said Congressman Fred Upton has been working closely with the family to help bring Roy home, but there is no timeline for when he may return.

Roy has a cellphone, so he is able to keep in touch with Kim. He is currently staying in a rundown hotel that costs $15 (U.S.) per night.

Kim said helping her husband afford living out there is getting tough because her illness prevents her from working.