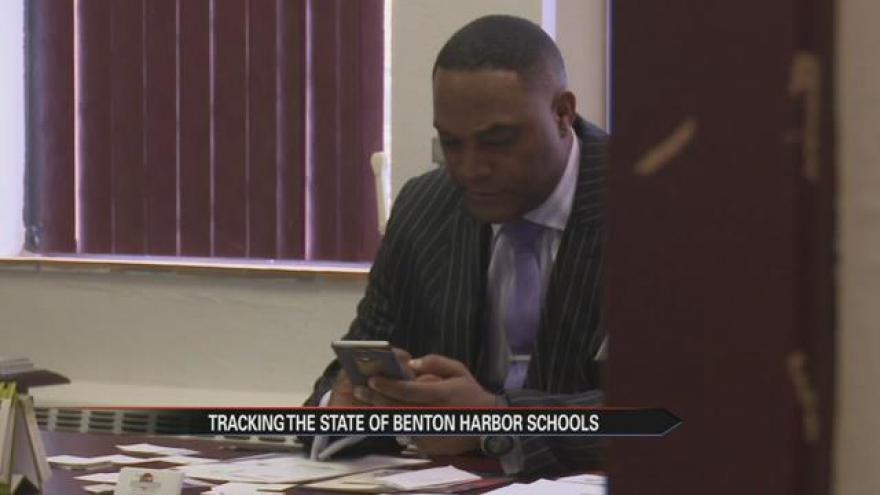 In an exclusive interview, Benton Harbor Mayor Marcus Muhammad maps out his message to concerned families as possible school closures keep the community on edge.

“Anything that impacts my residents or impacts this city, as the mayor, I have to weigh in,” Muhammad said.

Muhammad is caught in the middle of it all as the city’s leader and a concerned parent.

“I have five children that attend Benton Harbor Area Schools,” he said. “Three in which would be affected [by the closings].”

The Benton Harbor High School graduate said he did not hold his own town hall in an effort to overshadow superintendent Dr. Shelly Walker’s – which was held the night before.

He said he held it because the city’s livelihood depends on its schools.

The mayor said he is working closely with Dr. Walker and the school board to prevent half of the district from being shut down.

But in his interview with ABC57, Muhammad would not go into specifics when asked how his working relationship is with the fairly new superintendent.

“Well, you know, all due respect, Taylor, this is not about Dr. Walker and Marcus Muhammad,” he said, when asked by reporter Taylor Popielarz. “It’s about the students who go to Benton Harbor Area Schools. It’s about the parents who are now concerned about where they’re going to send their children. It’s about teachers. I would hate to make this about personalities and administrators and leaders. It’s about the community.”

“Do you have faith in Dr. Walker’s leadership?” Popielarz asked.

“I think that Dr. Walker is reaching out to the community and right leaders at this time to – because it’s not going to take – it’s going to take more than just one person to bring Benton Harbor Area Schools back,” Muhammad said.

Muhammad worked for the school district for nine years.

He said he’s confident his knowledge of its inner workings and problems is helpful as he lobbies with the state to keep the doors open.

Muhammad said his message to concerned families, right now, is to prepare to head to Lansing on February 24 to protest to keep the schools open.

Muhammad said he will be there, along with Dr. Walker.