Benton Harbor mayoral recall election will be held in November 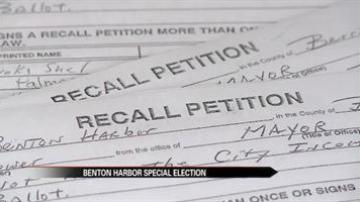 The judge allowed some signatures that were previously disqualified to be reinstated.

The judge did not discount all signatures that were altered, just those that appeared to have been collected prior to November 9, 60-days from the date the petitions were submitted to the clerk's office.

The judge also found the clerk's office disqualified both signatures if a person signed twice. After adding 21 of those back into the count, the judge counted 407 signatures by qualified, registered voters.

The petitoners needed 393 signatures for a recall election to happen.

The judge wrote the clerk should hold the recall election on the next election date, November 4, 2014.

In January 2014, a petition to recall Benton Harbor Mayor James Hightower was submitted to the Berrien County Clerk of Courts.

The petitions were circulated by several people, but James Cornelius and Edward Pinkney collected the most signatures.

The Berrien County Sheriff's Department then began an investigation into irregularities in the signatures.

Because of that investigation, in April, Pinkney was accused of changing the dates people signed the petition to a later date and time and causing them to be submitted or aiding in their submission.

He is also charged with six counts of allowing the same person to sign more than one time, then asserting that he didn't allow that to happen.

James Cornelius, who was also part of gathering the signatures for the recall petition, was arrested and charged with one count of permitting someone to sign a petition more than once and permitting signers to sign out of his presence.

After the two were charged, the Berrien County Clerk filed for a stay of the May 6 recall election.

On May 1, the election was stayed.

In light of all the evidence presented and the multitude of election laws that were clearly shown to be violated I was disappointed to hear the judge’s decision.

The way I see it most of the rules have been clearly broken and with this ruling, now one has been changed as it relates to double signatures (which states in bold lettering on the petition it is a violation of the election law). This will clearly have a serious impact on elections across the State. This election will certainly be one deemed as tainted, and I cannot see the County Clerk not asking for a stay and appealing this decision.

My hope overall was if the laws are to be considered it would apply to every area not just the double signatures. Testimony showed one sheet was not circulated by the signer which is a violation, and that sheet should not have been counted but was allowed to stand.

In regards to an election in November, I was ready to go to the polls in May I’ll be just as ready come November. Mr. Pinkney and his candidate Commissioner Muhammad will not win this election. The judge may have given his decision, but the residents of Benton Harbor will be the final judge.