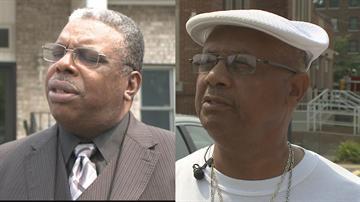 Pastor James Atterberry of the Brotherhood of Nations Church in Benton Harbor was elected president of the post unanimously by members.

A special election was held at the Virginia Edwards Community Center and former NAACP president Edward Pinkney was not allowed to run.

Pinkney, a controversial and outspoken NAACP leader for the past three years, claimed he was wrongfully ousted from his position and claimed votes were paid for. “We know for a fact there’s something wrong,” he said Thursday. “We know they’re trying to stack the deck.”

The NAACP got rid of Pinkney as the president of the Twin Cities branch because he failed to hold elections in 2010 and 2011.

Pinkney is best known for organizing protests against Whirlpool Corporation and the Senior PGA Championship at Harbor Shores. He could often be seen wearing a ‘Whirlpool commits genocide’ tee-shirt in downtown Benton Harbor.

“All these memberships were sent in without our knowledge,” said Pinkney. He claims 250 NAACP memberships were bought to control the leadership of the group and were paid for by Marcus Robinson, a former Whirlpool employee at the Consortium for Community Development in Benton Harbor.

“That statement is about as true as his tee-shirt statement,” Robinson told ABC 57 News Thursday. “There are a lot of people that joined and (spent) their own money and wanted to be a part of this because they want better leadership.”

Atterberry is the president of the Benton Harbor Leadership Caucus, a group that formed in Benton Harbor over the past year. The caucus is comprised of a group of ministers and community leaders that oppose the negativity of certain local leaders including Pinkney.

Atterberry said a grassroots effort led to his nomination as new president of the NAACP. Atterberry said many people were disappointed with Pinkney’s leadership. “And that’s why you see a surge of people saying we need to have new leadership,” he said.

Pinkney said he plans to file a civil lawsuit against the NAACP over his ouster.