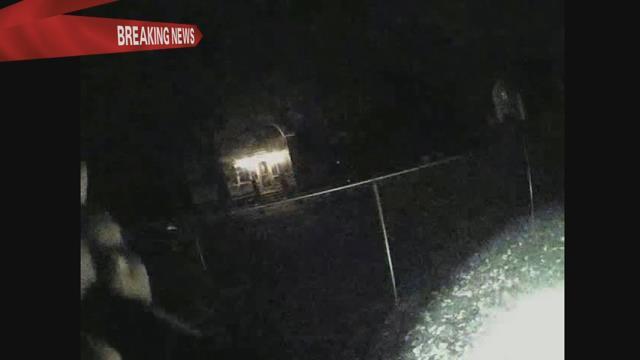 The video of Tuesday’s deadly shooting in Benton Harbor shows exactly what happened leading up to those shots.

They were responding to a false tip that someone was being held at gunpoint at a house on Pavone Street.

The video, from one of three body cameras at the scene, first shows officers taking the resident’s information.

Suddenly, several shots are heard, and the officer wearing the body camera begins running for cover.

Benton Harbor Director of Public Safety Dan McGinnis pointed out an woman walking in the video, who was not involved.

McGinnis says officers helped save that woman as the shots began to ring out.

“They were looking for cover. Again, this was pretty loud, pretty shocking,” McGinnis said.

After a series of shots that police say came from both the man identified as Darius Wimberly and one of the officers, the video ends.

McGinnis says that’s when the officers tried to save Wimberly.

“We immediately started lifesaving efforts. Mr. Wimberly was alive up until the point he got into the ambulance,” McGinnis said.

As for the other two videos, and the rest of this released version, McGinnis says none of that will be released anytime soon out of respect for the family and the officers.

In the meantime he asks anyone who watches this video, to do so with patience, as does Mayor Marcus Muhammad.

“I think that by and large, the community is of the mind and spirit that we will wait for the investigation. Of course, it doesn’t always come out as we may want it to, but I think the community as well as myself am prepared to receive the truth and are ready to move forward,” Muhammad said.