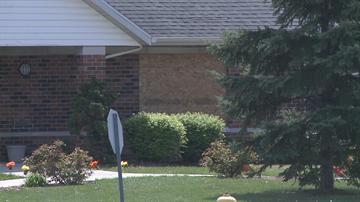 BENTON HARBOR, Mich. - A bomb went off in a Benton Harbor apartment complex Thursday morning and neighbors think it was an act of retaliation.

According to Benton Harbor police, just before 1 a.m. a pipe bomb detonated at the Church of God in Christ Village Apartments on Territorial Drive. An investigation by the Berrien County Bomb Squad found that the bomb was set outside the window of the rental office.

“It looked like the fourth of July,” said Ollie Williams, a tenant at the complex. “I ran to the balcony door and just saw smoke coming from the office building,” said Dondrell Jefferson, another tenant.

“All the years I’ve been out here I’ve never heard of anyone having a bomb,” said Williams.

Friday afternoon the rental office window was boarded up and looked to have minimal damage. Police were initially called for a piece of shrapnel that broke a window at a nearby building.

“It makes me feel unsafe,” said Williams. “If we were out here it could have been one of our (apartments)… stuff like that makes you feel uncomfortable when you’re paying to be in peace.”

Jefferson said a bomb is scary but not unexpected considering what happened Wednesday. “There was a lot of eviction notices out here yesterday,” he said. “Somebody was trying to make a statement.”

“Somebody’s trying to retaliate,” said Williams. “That’s the only thing I can think of.”

Staff at the C.O.G.I.C. Village would not comment on the explosion or evictions at the complex.

Police have not made any arrests. Nobody was injured.