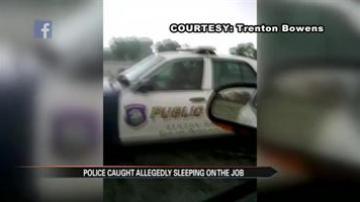 BENTON HARBOR, Mich. -- Should police officers get paid to sleep in their car? That was the caption of a video posted to Facebook by Benton Harbor City Commissioner Trenton Bowens on Saturday

The 45 second clip shows 2 city police officers that appeared to be sound asleep in their squad car.

"I am in disbelief and shocked by the video," said Commissioner Bowens. "It is unacceptable and a misuse of public trust with officers sleeping on the job. I received communication that the officers faced disciplinary actions and applaud Officer McGinnis for showing leadership and taking action. Behavior of this magnitude is unacceptable."

In less than 2 days, the video has already been shared over 800 times.

The clip comes on the heels of an announcement made by Benton Harbor's Deputy Director of Police Services Dan McGinnis.

Earlier this month, Director McGinnis said that gang activity in Benton Harbor is on the rise, and that the police force could use the community's help in curbing the issue.