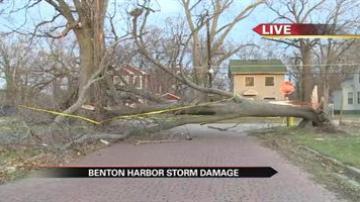 BENTON HARBOR, Ind. -- Residents of Benton Harbor are anxiously waiting for their power to be restored and their heat to come back on. The storm knocked out power to thousands of homes and even though crews are working hard to restore power, some residents will still be without power during Monday night's cold temps.

Trees that were knocked down by the wind brought down power lines across the city, leaving thousands without power.

"I looked up out the window and that tree was coming, it was coming towards the house so fast, it was really scary," said Edward Hubbard of Benton Harbor.

"It was an ice storm that got us last year and this year it was wind," said Thelma Bell of Benton Harbor.

"At this time it's still off. No crew trucks have been out," said Kwayne Bynum of Benton Harbor.

Massive trees are uprooted, others are snapped in half and one electric pole ended up leaning at a 30-degree angle.

Thousands of people in Benton Harbor have been without power for more than 24 hours.

Thelma Bell packed overnight bags for her grandchildren, all under the age of 5.

"There's no way we can even bundle up here. Not enough blankets for 20 degrees," said Bell.

Across town, Hubbard says he almost lost much more than his power in the storm.

With temperatures that are supposed to be in the 20s Monday night, the Berrien County Sheriff's Department says the best thing for you to do if your power is out is try to find somewhere else to stay, like with a friend or family member.