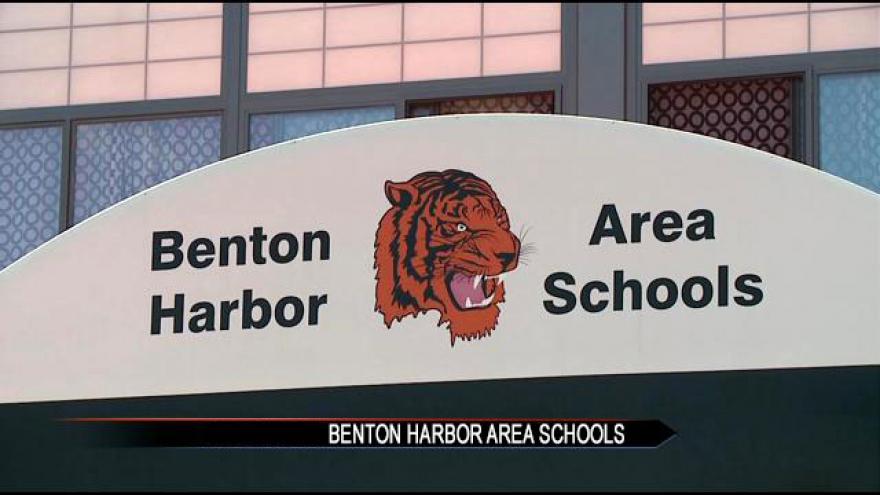 A new leader was announced to help right the ship at Benton Harbor schools at a special session board meeting Thursday.

Amid a lot of back and forth drama over the past few months, Dr. Robert Herrera will take over in July once all the paperwork is pushed through. He boasts an extensive resume as a leader at several southwest Michigan schools; Most recently, South Haven.

The move was a big step in what the board is calling “a transitional milestone” for the district years in the making.

The board voted unanimously to bring in Dr. Herrera.

The board made the decision after holding a closed session to discuss complaints which have been brought to the forefront by parents.

One community member, who’s an active participant in the district, says the decision boils down to one thing.

“If we can come back to what our goal is and always should be, is the kids, the students, the proper quality education. There is no reason why St. Joe can do what they do when they get pretty close to the same per pupil funding that Benton Harbor does,” said Lou Ann Vidmar, Uniserv Director for Michigan Education Association.

Back in April, former superintendent Dr. Shelly Walker resigned from the district. She made that decision after the board opened an investigation into her handling of a safety and gang prevention grant last December. Doctor Walker did help the district enter into a partnership agreement with the state in an attempt to improve the district and now the board says they hope to make some strides with a new leader at the helm.

“Be it resolved that The Board hires Dr. Robert Hererra as the district Superintendent effective July 1st, 2018,” said Marletta Seats, Benton Harbor School Board President

Also worth noting, the school board accepted the resignation of former high school football coach Elliot Uzelac during that meeting.

The district still wants to pursue legal action against him for comments he made to the Herald Palladium saying the district is under-performing and letting students down.

Herrera posted a statement on the South Haven Public Schools stating he will be the district's CEO:

At this time, I would like to provide you with an update regarding my understanding and perspective on the current situation at Benton Harbor Public Schools and my involvement.

As you know, Benton Harbor Public Schools has recently been faced with a variety of challenges, both academically and financially. Due to my expertise in school improvement and reform, I was recently approached by the Michigan Department of Education School Reform Officer to assist Benton Harbor Public Schools in their partnership agreement with the Michigan Department of Education.

With the consent of South Haven Public Schools, I agreed to serve as a consultant for Benton Harbor Public Schools to the extent allowed through my personal leave time.

At this time, I have not been offered a contract from Benton Harbor Public Schools and have not received assurances from the Michigan Department of Education or the Treasury regarding the legalities of the creation of such a position.

Although I recognize the unique position and am honored to have been requested by the Benton Harbor Board of Education to assist, the reality is that there are many factors and components that still need to be addressed by the Michigan Department of Education and Treasury before I can consider my involvement.

Since accepting the South Haven Superintendent position six years ago, my family and I are grateful to be a part of this community. I can truly say that the support and generosity demonstrated by the stakeholders of South Haven Public Schools has been second to none. Each day, I feel privileged to work alongside the outstandingly dedicated and capable staff at South Haven Public Schools in serving the students of this district who have made such an impact in my life.

If I were offered an alternate position outside of South Haven, the decision would be difficult and would require a great deal of reflection and consideration. Looking ahead, if the time came to consider such an opportunity, the South Haven community would be notified and updated throughout the decision-making process.

Thank you, again, for your partnership and support. If you have any questions, please feel free to contact me at (269) 637-0500 or by email at rherrera@shps.org.