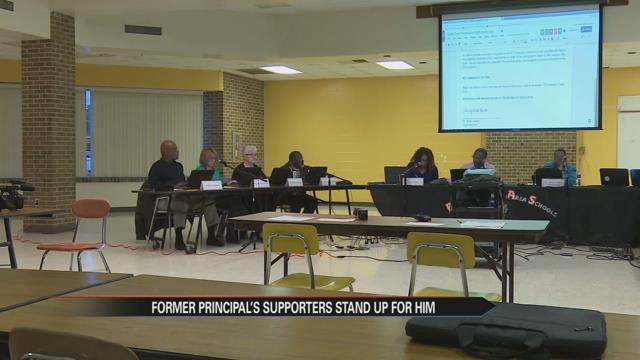 In its first meeting since voting not to fire Rodger Tripplett, the Benton Harbor School Board listened to Tripplett supporters, but stuck to business as usual.

The special board meeting was called after a meeting on October 21 lasted more than seven hours as supporters of former high school principal Rodger Tripplett spoke on his behalf.

A few Tripplett supporters spoke during the public comment section of Thursday’s meeting.

“I love Mr. Tripplett,” another resident said. “I knowed him from a kid [sic]. And I think he’s a good man.”

“This was not the character of a person that does exactly today what he did then as a child of loving and caring for others,” Benton Harbor City Commissioner Mary Alice Adams said.

But the Benton Harbor School Board did not respond to those comments publicly, leaving the 40+ attendees at Thursday’s meeting with little new information.

Tripplett has been on paid administrative leave since June for a series of allegations, ranging from possessing child pornography to letting members of the class graduate without having met state requirements.

Board president Joseph Taylor said the 3-2 vote to not fire Tripplett that took place on Oct. 21 stands, and a second vote is not in the works right now.

“Since the vote did not pass to fire [Tripplett], then they’re working on whatever’s next,” Taylor said. “Whether it be a job back with Benton Harbor Area Schools; and so, that’s between the attorneys right now for Mr. Tripplett and the school district’s attorneys.”

Tripplett was not at Thursday’s meeting, but his wife was.

She declined to be interviewed, but she did speak to the board during the public comment section about concerns she has relating to the district. She did not mention her husband.

Taylor said he could not comment when asked if Tripplett could return to the high school as principal.

There is also a petition going around calling for Benton Harbor Area Schools Superintendent Dr. Shelly Walker to be fired because of this situation.

At Thursday’s meeting, the board unanimously voted in favor of Dr. Walker’s leadership after a board member called for a vote of confidence.