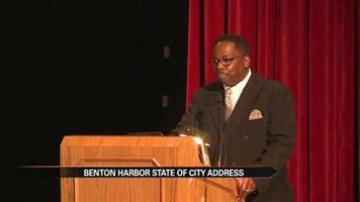 First the Public Safety Department made a presentation.

"If we look at our training from this year to last year, we’ve increased our training by over 70 percent" said Jeremy Connell, Deputy Director of Benton Harbor Fire Services.

The finance department made a major announcement. "We have reduced the accumulated general fund deficit by $1 million," said Jody Lundquist.

Next, the mayor took the stage.

"As you see tonight, we are not on the verge of bankruptcy," Hightower said.

In fact, he says the city has made so much progress that emergency financial manager Tony Saunders is on his way out.

"In less than three months, the emergency financial manager will exit and the Benton Harbor city commission will regain control of city business."

Not everyone was in favor of the mayor's state of the city address. Some said it was a political ploy.

Protestors gathered outside, and chanted "Hightower must go!"