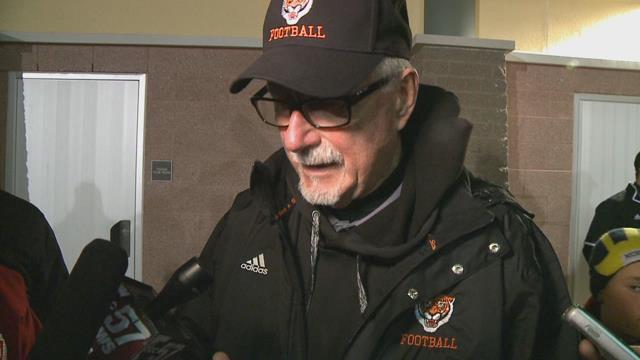 A historic season documented in the national spotlight has come to an end.

The Benton Harbor Tigers lost to the Zeeland West Dux in the district championship Friday night.

The Tigers traveled to Zeeland Stadium with a crowd of hundreds filling the stands to support them.

After being led onto the field by their now-legendary coach, Elliot Uzelac, the Tigers began to fight for their second playoff win in school history.

The Zeeland West Dux came to play – senior Tyler Thompson scored the first points of the game in the first few minutes of the first quarter.

The Dux continued scoring throughout the first half, including a big 50-yard touchdown by senior Darius Perisee.

When they weren’t scoring, the Dux hit hard on defense.

Benton Harbor’s moment in the spotlight came when junior Jeremy Burrell Jr. scored the Tigers’ only touchdown of the game – leading to an all-out celebration by the hundreds of Benton Harbor fans there watching.

But in the end, that touchdown would be Benton Harbor’s only of the night and the two teams met to shake hands following a 62 to 8 win for the Dux.

As both teams huddled after the game, the announcer at Zeeland Stadium credited the Tigers for their historic season.

And as the Zeeland Dux were presented with their district championship trophy, the Tigers cheered them on.

After the game, Coach Uzelac was asked what he wants people to take away from his team’s journey this year.

“This story’s about a bunch of kids who’ve always wanted to do well,” Uzelac said. “And [the kids] just never had the guidance, the love, the caring, the discipline to give them that opportunity. And the best part about that is that when we did that, they embraced it, they moved forward and they had a great year.”

Coach Uzelac was also asked why he seemed so emotional during his post-game interview.

“[The students] mean a lot to me,” Uzelac said. “I didn’t go there for any reason except the kids.”