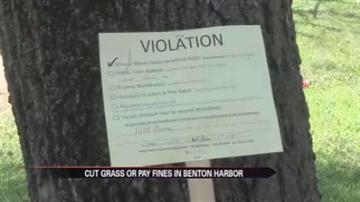 BENTON HARBOR, Mich. -- Yellow signs have been popping up on overgrown lawns in Benton Harbor. The signs mean residents must mow their lawns, or risk fines.

"We are going to be doing this every day this week until Sunday. That's the last day, and then from there we will still be doing this regularly, actually weekly but with a reduced amount of contractors. The goal is to get the city at a level that is manageable,” said Tony Saunders, Benton Harbor Emergency Manager.

City officials say they have taken notice of yards that are not getting the proper maintenance and they are taking it into their own hands.

"Well it is a little bit overdue. We got a little bit frustrated with the way the city looks, so we are looking at putting a stamp on that and change that a little bit,” said Saunders.

Saunders says yellow violation signs were put up in front yards last week hoping to get residents to cut their own lawns.

But for those who didn’t, their lawns will get cut by the city. The homeowners will then get a $200 fine.

"We got a lot of grass that ain't [sic] being cut, and so they hire four contractors to clean up the city. If the grass is over six inches tall, the contractors will cut it,” said Jack Campbell, lawn care for the City of Benton Harbor.

The city will also have crews picking up trash.

Residents say they are pleased the city is working to spruce up neighborhoods.

"I had left here and when I came back it was a disaster. It is nice of them to clean up the neighborhood and clean up their yards and make the city look presentable again,” said Zerita Pasha, Benton Harbor resident.