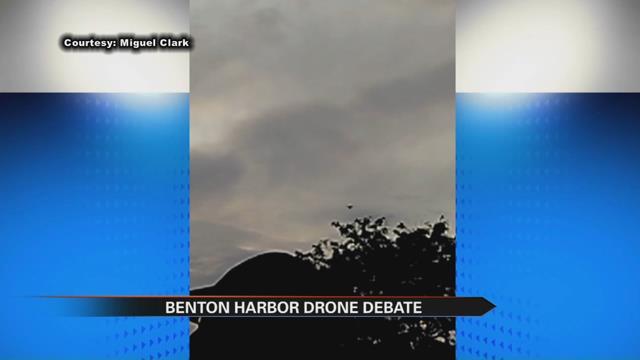 Officials in Benton Harbor are planning on creating an ordinance to regulate drone activity in the city limits.

It was a hot topic at the commissioner's legislative meeting on Wednesday.

One commissioner at large said they spotted an unidentified drone flying around at a city event, and that prompted the drone debate.

Mary Alice Adams said, “It could cause a person to have a heart attack! Seriously! I mean you’re washing dishes, you’re looking out your window and all of a sudden something comes by with an eye on it!”

Adams and the chairman of the legislative committee in Benton Harbor said their biggest concern is safety, and whether drones will violate the constitutional rights of citizens by invading their privacy.

Marcus Muhammad said, “With camera usage, they're able to look into people’s homes so we’re concerned with how people are using them.”

Muhammad presented a resolution to the city manager for review at the meeting.

Muhammad said, “Privacy is definitely a serious issue. We know that drones can intercept text messages.”

Darwin Watson, the city manager, pointed out that Michigan State Police and various utility companies have already been authorized by the FAA to use drones in Benton Harbor.

Watson said, “The state police have gotten permission from the FAA for use of drones in the state of Michigan.”

Watson said they need to talk to an attorney before they approve a drone ordinance. For some purposes, Watson pointed out, that drones can save lives.

Watson said, “Identifying power line problems from a safety standpoint where they don’t have people going out trying to find live wires."