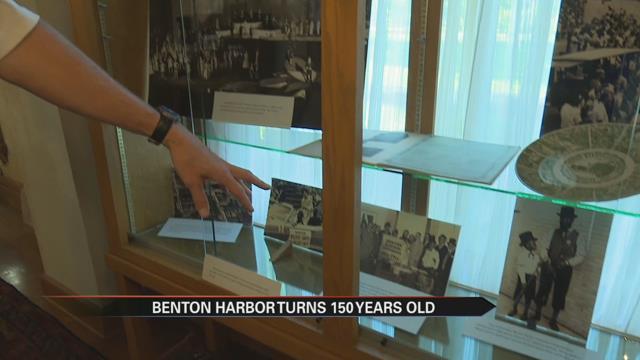 The city of Benton Harbor is celebrating its 150th birthday Thursday night.

The party – happening Thursday at 7 p.m. at The Morton House on Territorial Road in Benton Harbor – will include cake out on the front lawn, longtime residents of the city reminiscing and a three-part exhibit highlighting Benton Harbor 150 years ago, 100 years ago and 50 years ago.

“We had these pictures of what they called the ‘Old Tom Benton’ fire engine, and we recently found out that that is still around and it’s up in a museum in Allendale, Michigan,” Jager said, referencing part of the display showcasing Benton Harbor 150 years ago.

“[This is] a Benton Harbor policeman in his kind of paddy-wagon,” Jager said, referencing a picture in the display for 100 years ago.

The 50-year display features photos and artifacts from the city’s centennial celebration.

There’s also a throwback display to some 1960s fashion in Benton Harbor, as well as a tribute to the city’s first African-American police officer, mayor and postmaster.

“So I think it really celebrates the whole history of Benton Harbor, not just the old 1800s history,” Jager said.

Jager also said he’s hopeful celebrations like this, and museums like The Morton House, will help keep Benton Harbor around for future milestone birthdays.

“It makes it a better city to have a historical grounding to it,” he said.

“It celebrates something in your area and means something to me, too, because I’ve lived here,” Roberts said.

The celebration is open to all Benton Harbor residents and residents from neighboring towns and cities.