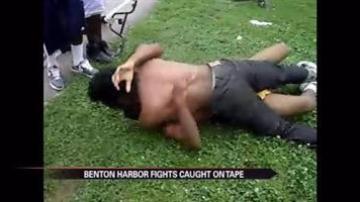 BENTON HARBOR, Mich. -- It's violence usually reserved for the movies. But in Benton Harbor, it's just down the street.

Martha Carter experienced a violent fight similar to those seen on YouTube in her own living room last month.

Her sixth grade great granddaughter was attacked in her own home by three girls from her class.

"I was hurt because this girl is in the 6th grade and three other girls came over to jump her. All of this started because there were other girls fighting and she broke them up. So, then they decided they wanted to whoop her too.”

It's a violent trend thats being publicized through social media.

James Jones is a teacher at Benton Harbor High School. He believes these fights are simply a passing craze.

“If its an event and its there, they’ll go ahead and record it. That’s why I agree with parents saying its just a current fad."

But, Carter believes this is more than just a fading trend.

"There were always fights like this but they weren't as aggresive."

Both Carter and Jones believe the solution to the violence begins at home.

"Whenever technology is made available to those students, if they're given a cell phone or a youtube account, parents need to step up and teach their kids how to use it responsibly,”said Jones.

"Unless we get involved with our kids, it's going to continue," says Carter.