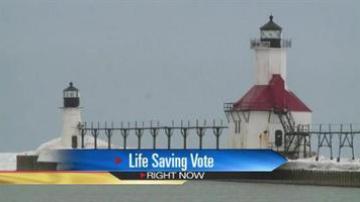 BERRIEN COUNTY, Mich. -- After years of debate, Berrien County Commissioners approved a plan to put life rings on its beaches. As many as nine rings will be installed before summer.

It was approved 9-3 during a meeting Thursday afternoon that was three hours long.

"It offers the opportunity to save that life - which I think is very important," said Commissioner Janette Leahey.

Leahey has been pushing for this resolution for months.

After several meetings, the measure finally was approved.

Commissioners now have to figure out where to put them and figure out the best way to monitor them.

"It's been way too long coming. There are lives at risk without those life rings out there," said South Bend resident Maria McKenna.

McKenna says she will feel safer taking her family to the beach.

"They save lives; it's proven. We need them. Other cities across Michigan have them - and I'm thrilled," said former life guard Ann Dahmer.

"I don't know what else we needed the money for," said Benton Township resident Michael Sleep.

Sleep likes the idea of life rings, but has concerns about the $40,000 needed to install them.

Most of that will be covered by private donations, but future costs to replace and watch over them are unknown.

"This is not a lot of money to save a life," said Leahey.

The plan calls for nine life rings to be installed by May.

There's some uncertainty on whether they'll be installed on the pier or on the beach.