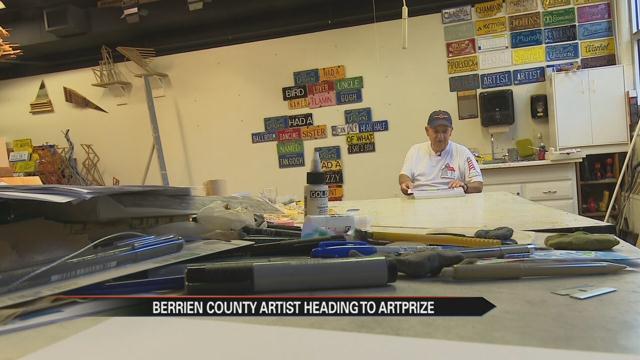 An international art competition in Grand Rapids kicks off Wednesday, and a longtime Andrews University professor is competing in it.

In his studio on the campus of Andrews University in Berrien Springs, Professor Emeritus Greg Constantine makes his signature work of art.

“Put these letters down here like this,” he said Tuesday afternoon, explaining how to use the machine he uses to create, “and then lift it up here; put a piece of plastic on it.”

It may not look like it while it’s being made, but the product is art.

“I make these out of vacuum-formed plastic,” Constantine said.

‘These’ are custom license plates, and Constantine doesn’t collect them, he crafts them; even painting rust on certain ones to age them.

“I was determined to be an art major,” Constantine said, discussing his childhood. “I didn’t know how the job market would be, but I stuck to it.”

He graduated from Andrews University in 1960 with a degree in art.

A few years after graduating, he returned to the Berrien County school to start teaching his passion and perfecting his own craft. He even earned a chance to show some of his work in New York City.

“I was picked up by two galleries,” Constantine said. “I had to make a decision between [the] two galleries, and [I then] exhibited, and did very well ever since!”

Since then, his work has been shown in Chicago, Germany, Paris, London and Romania.

And for the last six years, he’s competed in a growing art competition in Grand Rapids called ‘ArtPrize.’

“This is my seventh year in ArtPrize,” Constantine said.

He will be showing off his latest license plate creation at this year’s competition, which features nearly 1,500 entries.

“There’s a lot of high-quality art and people,” Constantine said. “There are artists from all over the world who do bring their work here [to Michigan] and exhibit because of the prize money!”

Constantine has also been selected to paint a Honda – yes, an entire car – which he plans to deck out in a Michigan lighthouse theme.

“It’s taken me on a journey, see?” Constantine said, while fiddling with some of his paintings that were inspired by a recent trip to a national park. “I’m doing all sorts of things with them.”

After 43 years of teaching and nine published books of his art, Constantine said his success is thanks to hard work and some luck.

“I have to credit myself, to some extent, [because of] my own ambition, my own drive,” he said. “But I have to also credit…I’ll call it good fortune.”

What’s Constantine’s advice to young, up and coming artists who want to get into the business?

Constantine will start painting the Honda in Grand Rapids on September 21.

Though you have to register at ArtPrize to vote for which entries will win the prize money, you can vote online for the Honda contest that Constantine and five other artists are competing in.