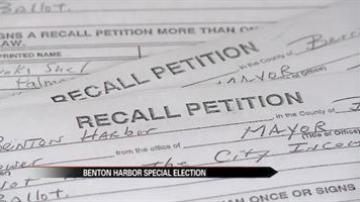 BERRIEN COUNTY, Mich. -- Berrien County Clerk Sharon Tyler, in a press release, said she disagrees with Judge John Dewane's decision to certify certain signatures on the petition to recall Mayor James Hightower. She said she will appeal the decision.

The judge said the clerk disqualified both signatures if a person signed the petition twice.

He determined at least the first instance of the signature should be counted. That added an additional 21 signatures to bring the total number of signatures to 407. The petitioners only needed 393 signatures to hold the election.

The judge then ruled there were enough signatures for the recall election and that it should be held on November 4.

This is the full text of Tyler's statement:

I have further reviewed Judge Dewane’s Opinion and Order in the matter of the City of Benton Harbor Mayoral Recall Election (Case No. 14-0117-AW).

I have great respect for Judge Dewane and agree with the Court’s factual findings, however, the issue of duplicated signers has a major impact on Berrien County and the State of Michigan.

Judge Dewane refers to the Clerk’s newly adopted practice several times in his opinion. These are not the Clerk’s practices; they are the Michigan Bureau of Elections’ practices and new Recall Process, as set by the Michigan State Legislature. The Clerks in the State of Michigan are certified according to these practices.

I have been in contact with the Bureau of Elections and the Attorney General’s office. I have received confirmation from the Bureau of Elections that they do not agree with Judge Dewane’s ruling on duplicated signatures. Berrien County will be the only county out of eighty-three in Michigan with a different set of procedures. This could have major implications on duplicate signatures on petitions going forward. To avoid any problems, I believe we need to be the same as the rest of the State of Michigan.

The State has encouraged me to request an Emergency Appeal. I am not challenging the judicial findings of the evidence; I am worried about the inconsistency this ruling of law has created concerning the recall procedures and petitions. I believe there should be a standard rule of procedures for review by clerks throughout the State of Michigan; therefore, I intend to seek a request for an Emergency Appeal on the issue of disqualification of duplicative signatures.