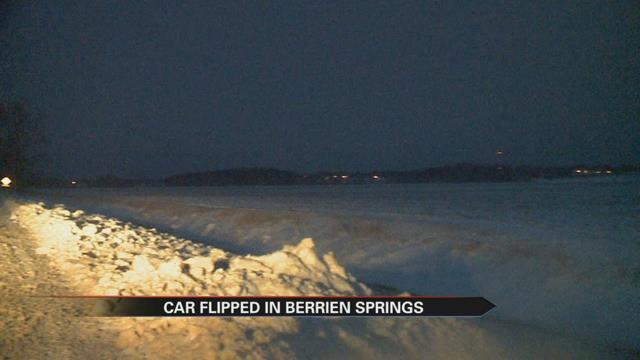 The biggest issues are power outages and car accidents.

Crews have been working all day to get power back and roads plowed but with a storm like this there’s a lot to get done.

Firefighter with the Berrien Springs Oronoko Fire Department Ric Streelman says he responded to around a dozen car accidents Thursday.

One of the worst accidents was on Linco Road near Scottdale Road.

“The vehicle was upside down so Officer Christner was standing on the bottom of the vehicle trying to get an access hole to get the person out,” said Streelman.

Poor road conditions caused a 22-year-old Stevensville woman to veer off Linco Road and land upside down in a ditch filed with three to four feet of water.

Responding Officer Robert Christner and Streelman—who also owns the auto service that helped tow out her car, freed the woman after about ten minutes.

Officer Christner was also transported to the hospital and has been released.

Streelman says the roads were bad throughout the county.

“Roads were plowed in some areas but not very well travelable in others. You got good roads and then all the sudden there's this huge drift area,” said Streelman.

But, even with such poor road conditions Streelman says there’s things drivers can do to prevent accidents.

“My experience has been, it’s almost always speed related. As the roads get worse then people have to continually adjust their speed,” said Streelman.

If you can’t avoid going off the road, there’s a few things to remember while waiting for a tow:

Indiana Michigan Power says 90% of Michigan customers will get their power back by midnight and the rest will have power back on by noon Friday.