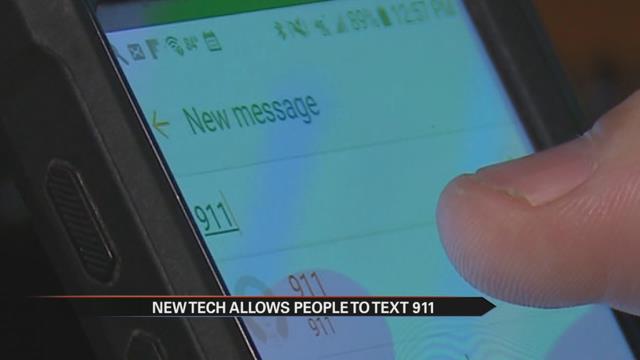 New technology will now let Berrien County residents text 911 when they are unable to call in an emergency.

“Call if you can, text if you can’t,” Berrien County 911 Director David Agens said.

It’s a new motto for those on the receiving end at Berrien County Dispatch.

“It’s a viable alternative to calling 911 by voice in those situations where, perhaps, you may be hiding from an intruder or a domestic violence situation,” Agens said. “And it’s really a great thing for the speech and hearing-impaired folks; it gives them access to public safety that everybody else has.”

Simply address a text message to 9-1-1 and write out your emergency and your location.

The text will come through to the dispatch center, in either Benton Harbor or Niles City, just like a phone call, allowing a dispatcher to answer you within minutes.

Lanny Duffel is a 10-year-veteran dispatcher in Berrien County who has handled calls where speaking was not an option.

That was a domestic violence case, where Duffel had to use a 20 Questions type of training to understand the caller’s emergency.

“Texting would’ve been a great asset at that point in time,” Duffel said.

Duffel also said texting may help dispatchers handle traffic when multiple calls come in for something like an accident on the highway.

St. Joe resident Cathy Knauf recently dealt with that problem before texting was an option.

“I did see an accident and I called it in, and all the circuits were busy and it didn’t go through, and so, when I called back they had received the call, but this way I could’ve texted it immediately and known that they got it,” Knauf said.

The dispatch center does not expect an increase in possible emergencies now that texting is available, but Duffel said he and his coworkers are prepared to handle both calls and texts for help.

“We are trained to be multitaskers, so we can certainly do two things at one time,” Duffel said.

Anyone with a mobile device that has a text or data plan can use this service in Berrien County, including pay-as-you-go phones like Virgin Mobile or Cricket.

Duffel said the only downside of the texting service is that dispatchers will not be able to gauge certain situations based on the sound of a caller’s voice, emotions, breathing, etc.

The staff warns residents not to text while driving, and Agens said you should still call 911 if you’re able to.