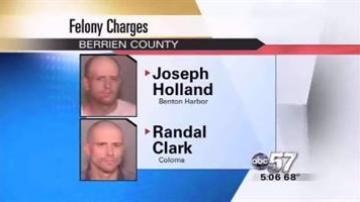 Police say they broke into a home and started up a meth lab.

Joseph Holland, 28, of Benton Harbor and 31-year-old, Randal Clark from Coloma were arrested by Niles officers.

Police say Tuesday they broke into a house and took some electronics. Officers later found the goods, the suspects and chemicals used to make meth in a nearby home.

A woman was also arrested.