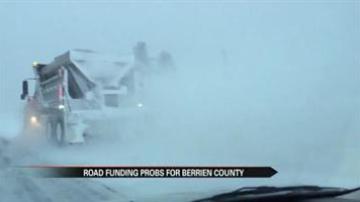 But with the cuts in the state gas tax which fund the road commission, many are wondering how the county is financing the snow removal.

“At first it seemed bad, but it was still snowing,” said Berrien County resident Lacrasha Callahan.

The only problem is the Berrien County road commission is struggling to finance that mandatory overtime, because of cuts to the gas tax.

“We are significantly down as are all road commissions in the state,” said Csokasy. “As people drive less because there are less people in Michigan, what we see is a steady decrease in the amount of revenue we see year to year.”

Their director says the need for more plowing due to heavy snow could unbalance the Road Commission's budget for the year.

“As we spend more money in the winter, we will be spending less in the summer,” said Csokasy.

This means when the snow melts and springtime arrives, they may not have the funds to repair the hundreds of potholes that pop up all over Berrien County.

“The main roads seem to be horrible. There are a lot of potholes. You are always dodging a pothole,” said Berrien County driver Lorelei Jones.

The Road Commission has been getting its funding through the states gas tax since 1997.

Csokasy has been meeting with all of the townships so that they can work as a team and tackle these roads with their limited resources.