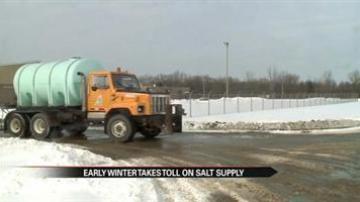 BERRIEN COUNTY, Mich. -- Because of all of the snow and ice Michiana has gotten so far this winter season, Berrien County is quickly using up its salt supply.

Managing Director of the Berrien County Road Commission Louis Csokasy said the snowy winter weather came early this year and it is taking a toll.

“I can tell you that this year through December we used 47 percent more salt than we did last year," said Csokasy.

Csokasy said the county has already used 2100 tons of salt this winter, out of 7000 tons ordered to last until the fall.

Csokasy said this weather will likely force them to cut into their summer budget to pay for more salt.

“If we have a snow storm, we have to clear the roads. We have to put the salt down. Put the sand down,” Csokasy said.

Csokasy said if the commission exceeds its winter budget, summer projects, like fixing potholes, might be put on hold.

“If we have a hard winter, you’ll see less work in the summer,” Csokasy said.

Though summer projects can be just as important, keeping the roads salted and safe for drivers is their first priority.

“We’re tasked with providing a safe environment on the roads. That’s really our primary task. So in the winter time keeping the roads clear is just about the most important thing we do," said Csokasy.