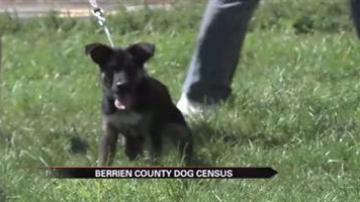 Animal Control is required to do a dog census every few years.

This time around, they are putting an emphasis on rabies shots.

Officers found a rabid bat near Bridgman in the spring mcuh earlier than usual.

"We're asking every person that has a dog to call in. What we'd want is their license which of course proves they've had rabies shots and their current rabies shot is good," Val Grimes.

The dog census goes through September.