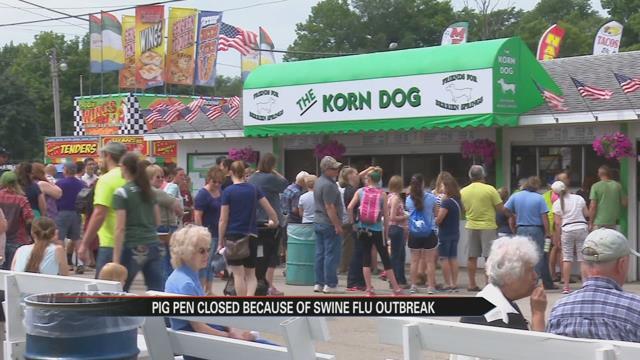 Along with fun at the Berrien County Youth Fair, there are precautions in place in response to a recent, and nearby, swine flu scare.

“This year at the fair, the public will not be allowed to go through the swine barn,” Berrien County Youth Fair Executive Director Karen Klug said.

But if you’re a pig handler, you and two family members will be given wristbands that allow you to access the otherwise-closed swine barn.

Klug said these moves are cautionary; adding to things like hand-wash stations placed throughout the fairgrounds to keep fairgoers and their animals healthy.

But even if swine flu was to surface at the fair, Klug said the all-important fair food won’t be jeopardized.

“Even if we do [get swine flu here], the pork is still safe to be consumed,” Klug said.

Roughly 125,000 people attend the Berrien County Youth Fair each year, according to Klug.

“I think it attracts people just because it’s one opportunity throughout the year for people to renew old friendships,” she said.

Friends and families come together to bond over their livestock, that famous fair food and some carnival rides.

But Klug said the main attraction is the fair’s exhibitors – more than 2,000 children, ages five through 20, showing off their animals, crafts, recipes and flowers.

“Being an exhibitor, I think, is an important part of growing up in Berrien County,” Klug said.

Katelyn Koebel and her brother Matt agree; they’ve been showing pigs at the fair since they were five-years-old.

“It’s really exciting because you get to meet friends and they’re lifelong friends,” Katelyn said. “It’s the best week of the summer.”

This year’s ‘fair royalty’ also said the fair is a special time of year.

“Ever since I was little, I’ve always just looked up to the fair kings and queens… and I just wanted to be a good role model for the rest of the youth and set a good example like the previous queens and kings did for me,” Mikaela Schuhknecht, the fair’s first-runner-up for queen, said.

Despite the swine flu concerns and a chance for rain, Klug said her team is excited for the 6-day fair.