Beshires gets life in prison for murder of baby Carter Donovan 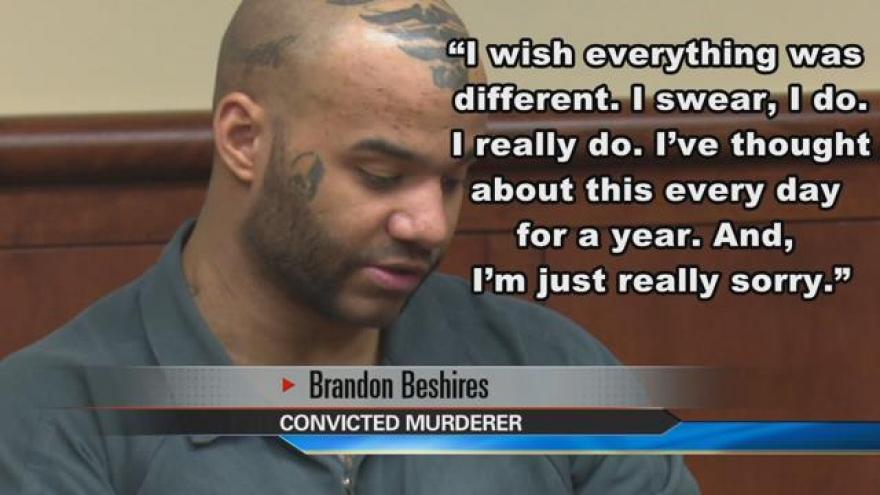 “I know you’re not a bad guy,” Sean said. “But you did something very, very wrong. And you’re gonna pay for that. You know that. Carter was a good boy. He was a damn good boy. You know that.”

Beshires admitted to killing baby Carter last February while his girlfriend – Carter’s mom, Autumn Atchley – was at a doctor’s appointment.

Atchley pleaded no contest to being an accessory after the fact in her son’s death.

Beshires was set to go to trial next month, but he surprised even his own attorney when he pleaded guilty to first-degree murder in December.

“He did what he thought was right at that time,” Beshires’ former attorney Donald Sappanos said. “That is, stop all the proceedings, stop his attorney from representing him, and told this court that he did not want to put his family or the victim’s family through anymore grief.”

Before sentencing Monday, Beshires spoke to the packed courtroom.

“I wish everything was different,” he said. “I swear, I do. I really do. I’ve thought about this every day for a year. And, I’m just really sorry.”

Judge Arthur Cotter sentenced Beshires to life in prison without the possibility of parole.

“What you did to this little kid was cold and cruel and heartless and despicable and a thousand other words I could think of,” Cotter said.

In addition to Sean speaking, baby Carter’s aunt spoke to Beshires as well.

“This is the last time I held Carter,” Michelle Raday said, holding a photo of her and the baby. “You took his life and all my family has left are photos and memories of his extremely short life. You robbed us all of a future of watching him grow – memories we now only get to imagine. I thank God for the times I got to care for him, for I have more memories than most. It’s all I have left and it will never be enough.”

Cotter said in his 3.5 years as a judge, Beshires is the first person he’s had to sentence in a first-degree murder case.

He called Beshires a “wretch,” and said when Beshires closes his eyes in his prison cell, the photograph they all viewed throughout the last year of baby Carter’s autopsy will haunt him.

Atchley was set to be sentenced Monday, but it’s been delayed while she finds a new attorney.