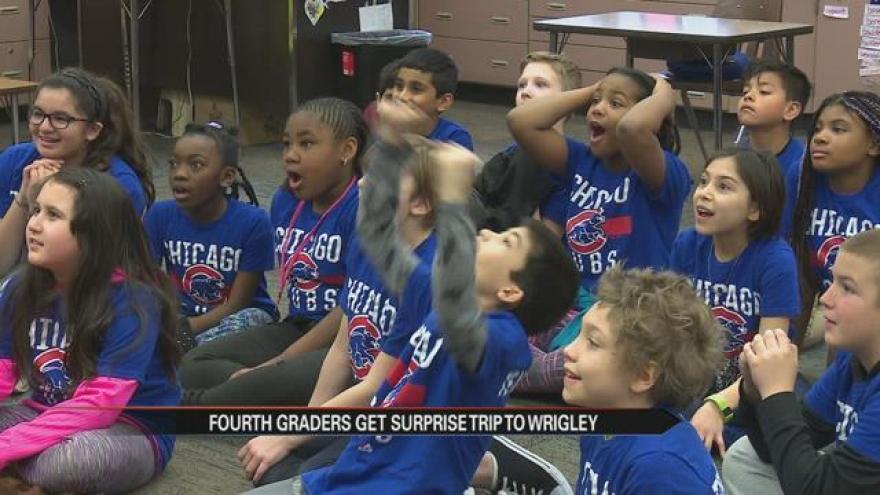 A fourth grade class from Walt Disney Elementary will be attending a cubs game on Opening Week.

Teacher Jodi Cramer found a connection to the Chicago Cubs, and managed to score a tour and tickets for her students.

Cramer made the surprise announcement to the class Wednesday.

The room erupted with cheers and squeals of excitement.

In a way, the students have already turned their classroom into Wrigley Field.

Everything is baseball themed.

They call themselves ‘Team Cramer,' and compare getting good grades as scoring bases.

“We are in spring training like they are, and it’s kind of like a real game, but we’re just a class with shirts instead of jerseys,” student Alexah Ward said.

Things got even more exciting when the Cubs won the World Series.

“I was like guys, ‘look at this team, they’re the underdogs,’” Cramer said.

She wanted to spread a message of inspiration, using the Cubs as a metaphor.

“We remember that and learn from them that we can overcome obstacles and we cannot let anybody defeat us,” Cramer said.

She had to use that mentality herself when reaching out to the Chicago Cubs owner through a friend.

The Cubs set up an Opening Day field tour, along with tickets to the game for Team Cramer.

“To see their expressions and share that moment with them is going to be priceless,” Cramer said.

The surprise announcement Wednesday was a home run, and Cramer’s students say they feel as if they’ve one it all.

“We’re a great team, and we always try harder and we never give up,” student Alayah Turner said.