Bethel College bringing back Master of Arts in Counseling program 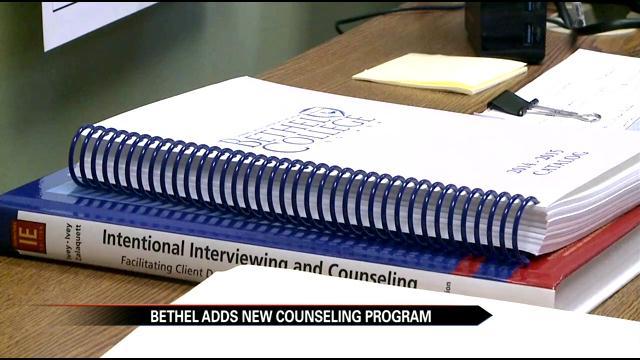 ABC 57 News has learned there is a severe shortage of mental health care professionals in the state. The need is so bad in St. Joseph and Elkhart counties, it's being labeled as severe.

But, a new move by a local college could help this crisis.

“I think there's just going to be a higher and higher demand for licensed clinicians over the upcoming years given how much healthcare is changing,” Bethel College Director of Human Services Chris Nowak said.

And she especially hopes many are graduating from the college's Master of Arts in Counseling program.

“The dynamics are just so different today than they were 15, even 20 years ago,” Nowak said.

It's a program that's making a comeback after almost five years. It's aimed at preparing and licensing students to work as counselors and therapists in the state of Indiana.

“There is a pretty severe need for professionals throughout the state of Indiana, but certainly here in Elkhart and St. Joseph counties,” Oaklawn Vice President Child and Adolescent Outpatient Services Bonita Schrock.

“Psychiatrists, medical doctors, etc. All of those are mental health professionals where we struggle to hire all that we need and have to limit services because of what we are able to hire,” Schrock said.

But she says Bethel College's program could help turn that shortage around.

“We've got a lot of great employers in the community, obviously we'll be working very closely with them as folks get ready to do practicums and internships,” Nowak said.

By allowing students to specialize in addictions, mental health or marriage and family counseling.

“We'd like to think the practicums and internships turn into jobs for folks,” Nowak said.

And with local mental health care facilities like Oaklawn in need of at least dozens of employees, they say they are welcoming the program with open arms.

“If they are focusing on that than that is a wonderful thing and we are very happy to have them,” Schrock said.

Nowak tells me although the college just announced this program today, already at least a dozen students have shown interest. Classes for the program begin in the Fall of 2015.