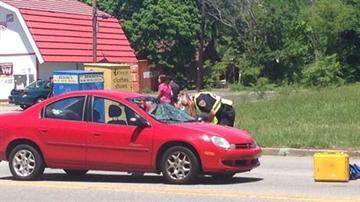 SOUTH BEND, Ind. -- A bicyclist was injured when he was struck by a car at Lincolnway and Sherman in South Bend.

The bicyclist is in the hospital with leg injuries.

Police say the occupants of the car walked away with minor injuries.

"Both of them are pretty much ok. They had a great deal of glass go through the vehicle so they're going to the hospital to get checked out make sure there is no glass in an eye or anything like that," said Kraus.

"We're still investigating that, but witnesses indicate the bike turned into the path of the car," said Kraus.

Judy Lee, President of the Bike Michiana Coalition, says with the warmer weather, there are more bicyclists and pedestrians out.

"This is the season when people begin after this long winter that more bicyclists and more people on foot, using alternative transportation," said Judy Lee, President of the Bike Michiana Coalition.

Lee says bicyclists also have a responsibility to uphold the rules of the road.

"Bicyclists really do, according to law, have the same rights and responsibilities of vehicles, which means they have the responsibility as well to pay attention to traffic," said Lee.