Bicyclists worried for their safety in Cass County 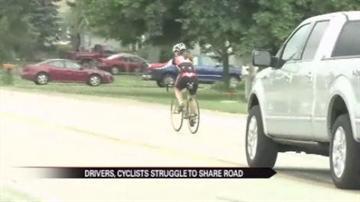 CASS COUNTY, Mich. -- Bicyclists on Anderson Road in Cass County, Michigan, are pleading with drivers to be courteous and share the road. But some people say the bicyclists need to heed their own advice.

The area is rural with lots of hills, but little space on the side of the road. Cyclists like the road because it isn’t well traveled, but recent run-ins with angry drivers have cyclists concerned.

"Bicycling is a wonderful sport and it's really exhilarating but there's always the risk of people being aggressive, or jerks,” said Bethany Cockburn, leader of 547 Cycle.

As the founder of a local cycling group, Coburn has heard and experienced her fair share of run-ins with aggressive drivers.

But nothing quite compares to an incident that happened to her group last Thursday.

"A young man in a light blue, royal blue car passed them and he was shooting a dark handgun that was a pellet or handgun-they weren't sure,” said Cockburn.

One woman was hit in the leg but fortunately only suffered a bruise.

"She's bruised. But they're all shaken,” said Cockburn.

This is just one incident in what Cockburn and other local cyclists say is a recent spike in aggressive behavior towards cyclists.

Many of the cyclists have taken to wearing cameras while they ride to record and report aggressive drivers.

"A few motorists don't speak for a whole bunch. And there are a few motorists who are going to be arrogant anyway. But we're seeing kind of an increase in motorists taking out their rage on cyclists,” said Paul Colan, owner of SpinZone Cycling.

Residents say the cyclists need to follow the rules of the road. They say they see cyclists riding 3 to 4 across on the narrow roads and rolling through stop signs.

The incident with the gun was reported to Edwardsburg Police. Police are encouraging anyone with information about the individuals to come forward.