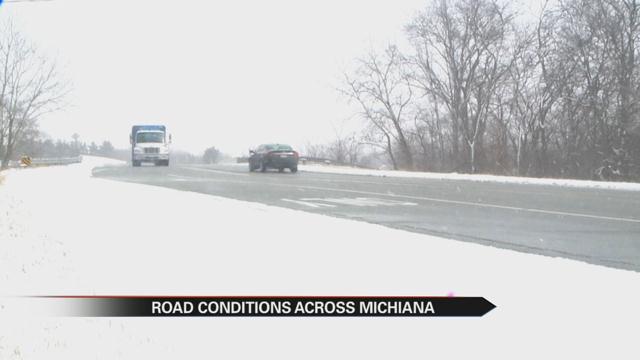 Authorities say they are keeping their eyes on this week’s winter storm system.

Both INDOT and police say since it’s been a while since the last big snow, drivers might not be mentally prepared.

“It’s actually been not too bad,” driver Emily Alberico said in reference to Michiana’s winter until this week.

The area has indeed had mild weather so far.

“I ‘ve been kind of mentally preparing for this snow that will show up at some point,” Alberico said.

The snow indeed showed up late Monday, and  is predicted to continue.

While it isn’t the first snow of the season, the heavy precipitation is out of character for such a mild winter.

“It’s been a little bit of an adjustment,” Alberico said.

According to police logs, county officers have already seen some of slide offs and minor accidents, even with only a few inches of accumulation.

“We know where the trouble spots are going to be,” Thompson said.

Thompson says the bypass and Elm Road are typically slippery, but it’s more about how than where one drives.

“What happens is winter driving is kind of an acquired skill,” Thompson said.

It’s a skill even expert Michiana drivers need to brush up on each year.

“We often have a lot of problems because folks have forgotten how to do it,” Thompson said.

Thompson says the most important skills to remember are driving slowly and without distractions.