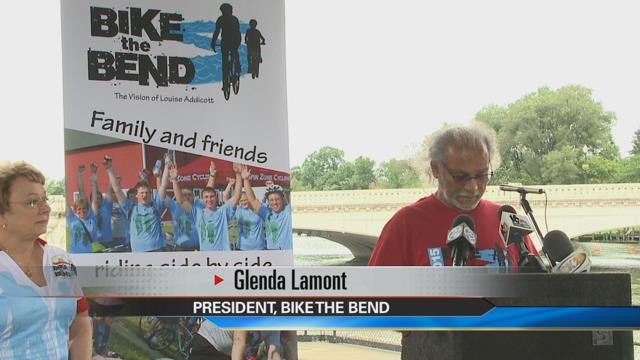 The organizers of the Bike the Bend ride announced Thursday they will no longer hold future events in South Bend because they do not want to risk rider safety.

In a multi-page press release and press conference, the organizers raised concerns they are not receiving adequate support from South Bend Police.

The group says after Bike the Bend 2014, riders and volunteers voiced concerns about safety at 7 South Bend intersections.

The mayor facilitated meetings between South Bend Police and Bike the Bend after Bike the Bend expressed concerns about the 2014 event.

Bike the Bend says it planned the 2015 route with South Bend Police to reduce the need for safety personnel without jeopardizing rider safety.

Less than a month before the 2015 event, Bike the Bend says they learned the South Bend Fraternal Order of Police recommended its members not sign up for Bike the Bend.

South Bend Police Chief Ron Teachman held a press conference in June to say his officers were tired because there were so many events going on. Teachman said special events in South Bend increased from 73 in 2012 to a projected 305 in 2015. Click here to read the full story.

Bike the Bend says the FOP rescinded its negative recommendation on June 5, nine days before the ride.

On the day of the event, organizers say 2 officers and 6 people from Volunteers in Policing from South Bend showed up.

They also had assistance from 5 officers from Mishawaka, 5 from St. Joseph County, 3 from Notre Dame and 125 volunteers.

We, together with members of the South Bend community, share Louise’s vision that Bike the Bend should be a community-focused event with safety and family recreation at its very foundation. However, the information we share with you today leads us to believe that not all necessary community representatives share in that vision. We hoped the issues leading to the problems we saw in 2014 had been resolved. Unfortunately, we were sorely mistaken as seen by the lack of support from South Bend police during Bike the Bend 2015.

Community safety and support means everything to the success of events like Bike the Bend. Because Bike the Bend cannot risk a threat to our riders’ safety, we are announcing today with great sadness, that we will not be doing another Bike the Bend for our community.

South Bend has welcomed Bike the Bend for the past six years. Unfortunately the event organizers were not able to come to terms with the police officers they asked to take part in the event going forward. We’re disappointed that it will not continue, and thank the organizers, sponsors, officers and volunteers for the successful past events. South Bend is proud to be a nationally recognized Bicycle Friendly Community, and will continue to work with the cycling community on future events and ways to make South Bend an even better place to ride.

We’re disappointed that Bike the Bend cited a lack of support from the Fraternal Order of Police as a reason for cancelling the event. It is a voluntary public safety assignment for officers to work special events approved by the Board of Public Works. This is made clear to organizers, and many plan accordingly, working with officers to make adjustments that ensure public safety and accommodate the staffing needs of the police force.

With the 2015 Bike the Bend scheduled soon after the extensive SB150 events, suggestions were made by police to move the event to the fall or keep it in May as in previous years, and making route changes to incorporate more bike paths and increase rider safety on roads with limited vehicle traffic. It was also made known that their vision required 50 officers, roughly 20 percent of our workforce. Bike the Bend organizers agreed to make a minimal change in the route only. The timing and route of Bike the Bend as planned made it unlikely that there would be that many available officers.

This resistance, coming after Bike the Bend did not compensate officers the full amount for their time in 2014, citing rider complaints, did prompt the FOP to discuss the matter. Even if one is unhappy with the level of service, when an agreement is made and an employee shows up and performs his or her duties, one cannot decide to withhold compensation. In the planning stages, police officers serve as partners with organizers, not their employees, offering our expertise in promoting public safety to help make an event a success.

The FOP confirmed with our attorney that not signing up for voluntary overtime is not a work stoppage or job action. It’s a matter of choosing personal time over an extra shift. Whether or not to work the 2015 Bike the Bend remained a voluntary, individual decision for officers, as it is for all special events.

Chief Teachman was correct when he stated in June that not all special events can be staffed with police officers, especially one with a plan that requires 20 percent of the force. Bike the Bend organizers showed little willingness to consider the concerns expressed or changes suggested by officers, who have extensive experience serving in a wide variety of events.

South Bend Police work regularly in partnership with event organizers to develop plans that promote safety first and foremost, and maximize the use of existing resources in both personnel and infrastructure.

We remain open to working with Bike the Bend organizers in the future, as we do and have with all other event organizers and participants.