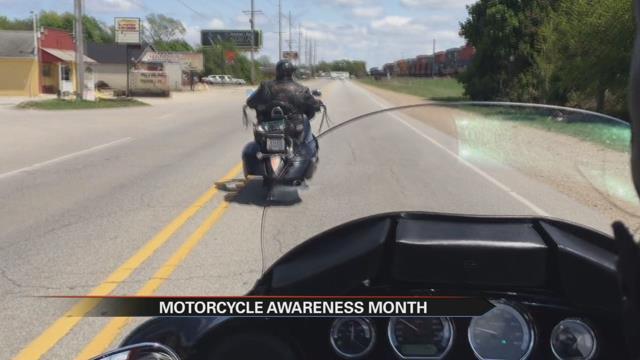 Each years thousands of motorcyclists are injured or killed in accidents across the country. May is dedicated as Motorcycle Safety Awareness Month to remind people to share the road with motorcyclists.

In 2014 alone, 4,586 motorcyclists were killed, that is according to the National Highway Traffic Safety Administration. The NHTSA hopes with education those numbers will decrease.

"The number one thing you can do to protect a cyclist is just give them space whether it be before you pull out in front of them or following or pulling back in front of them after passing them,” Al Ganser who is an avid biker.

Ganser survived a serious motorcycle accident back in 2014. “It’s nothing short of a miracle that I’m walking around here,” he said.

He was traveling near Mayflower Road in South Bend about to pass through an intersection when driver turned in front of him. He collided with the car.

“It kind of picked me up kind of like a puppet. I flew over the car and landed on the pavement,” he said of the accident.

He was left with several broken bones, a punctured lung, and had to have six vertebra fused together. He also had to spend about six weeks in the hospital and later learn how to walk again.

“I’m just really fortunate and blessed to be alive here today after the crazy accident that I did have,” he said.

He says he has close friends who have been killed in motorcycle accidents and that it is crucial for people to pay attention to bikes on the roads.