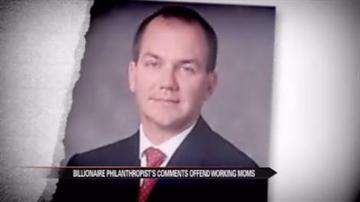 Comments made by one of the richest men in the world have people wondering if this philanthropist is also a sexist.

A respected hedge fund billionaire is making headlines for what he said about working moms.

Paul Tudor Jones is a legend on Wall Street and father of four.

During a panel he was asked why there were no women on Wall Street and he said that motherhood is a focus killer and for that reason there is a lack of "great" women traders.

"Every single investment idea is going to be overwhelmed by that emotive connection between the mother and the baby," said Jones.

Tudor Jones apologized claiming gender bias is the opposite of what he stands for and an accounting firm found that female hedge fund managers performed three times better than men during 2012.