Bison recaptured after night on the loose 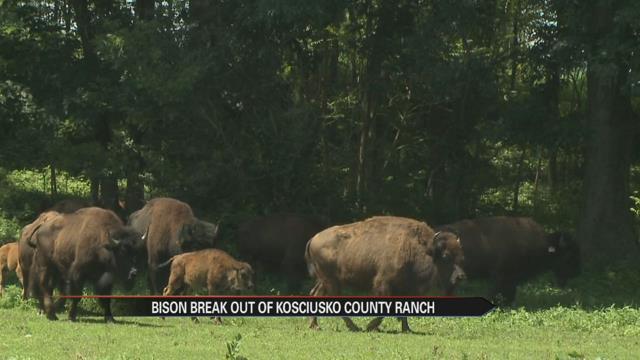 Wednesday night, 20 bison escaped from their ranch and wandered around Pierceton for several hours. With the help of neighbors, the bison were finally contained.

“They just found a weak spot in the fence,” said Robin Liechty, the farmer who owns the Bison.

It was the last thing Liechty expected.

“Been doing this about 10 years. Never had any out,” said Liechty.

The herd took full advantage of their night out.

They were spotted all over the surrounding area, and police were called in to keep them off the roads.

“They were spooked once they got out and on the road,” said Liechty.

Some helpful neighbors, like Tom Maze, rode their horses to gather the herd.

“It has been a chore to get them contained,” said Maze.

Thursday morning that teamwork paid off.

The group managed to gather the bison in the fenced off pastures of a stable 2 miles from their ranch.

“Once they're in the trap, we've got them,” said Maze.

The trap is on its way from Michigan, and Friday, they'll use it to load the bison onto trailers to be taken home.

After counting his bison, all 20 were captured unharmed.

Liechty is also counting his blessings.

Had the bison not been gathered, the worst case scenario would have been putting them down to avoid danger.

Liechty said that would have put him out of business. He says he is going to put up a new fence to avoid this in the future.