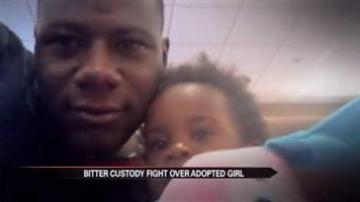 An innocent baby girl has been trapped in the middle of a bitter custody battle.

The girl's biological mom gave her up for adoption to a family in Utah.

The girl's biological father, a staff sergeant in the Army, never knew he was going to be a father or that she'd been put up for adoption.

Recently a court ordered the girl's adoptive parents to give back the child to her father within 60 days, but they aren't giving up and are going to fight the court order.