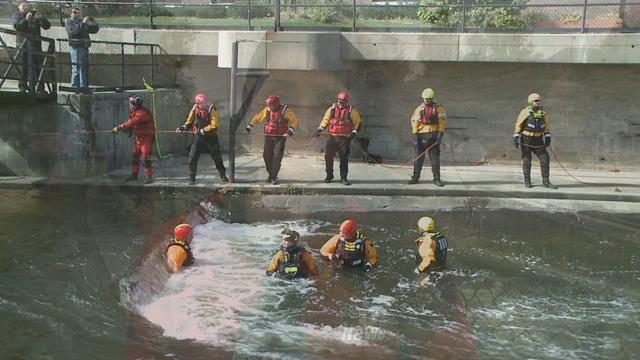 Hurricane Joaquin is churning in the Atlantic, but it’s also affecting one of South Bend’s big annual events.

The International Association of Water Rescue Professionals are still training in the East Race, but had to make some major adjustments because of the storm.

The Black Hawk helicopters, normally used in the training, won't be available because they might be needed on the east coast for hurricane rescues.

“We’re all bummed. We all like playing with Black Hawks.” Dave Abt, president of IAWRP said. “They’re all on standby mode for flooding for evacuation stuff."

One instructor even had to skip the training to be on standby in North Carolina for any damage from Hurricane Joaquin.

“I was more disappointed with that instructor going back. He’s a very good guy,” said rescue trainer Justin Todd.

Despite the disappointment, the international group of firefighters and law enforcement say they are still looking upstream.

“We still have a ton going on this week,” Abt said.

The say the absence of the helicopters is all the more reason to dive into training head first.

“I’d say with that Black Hawk coming in now being canceled, that just goes to show that what we’re doing how important it is especially throughout this time of year during hurricane season, flood season and everything else,” Todd said.