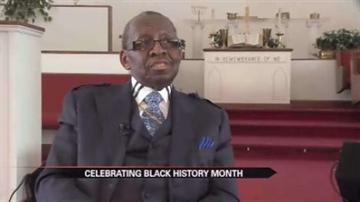 In celebration of Black History Month, we're taking a step back in time with Bishop Donald Alford. Alford, a leader in the community, is one of South Bend’s oldest living pastors.

Sitting in the sanctuary of Pentecostal Church of God in Christ, Bishop Donald Alford dug deep into his past, reflecting on the city where he was born and raised - south bend.

"Whites were always on the left side of Western Avenue,” said Alford.

We looked back to a time when racial tensions were high.

"It was completely separate. We had our world and they had their world."

The two worlds collided during the civil rights movement when nationwide, African Americans rebelled against the social norms of inequality and racial discrimination.

Bishop Alford remembers the riots of the 1960's that changed the landscape of places like Western Avenue."

"To drive on Western Avenue from Lafayette to Lambardi and to see literally almost every store front had to be boarded up. It was just terrible."

The headlines from tribune articles tell the tale of what was referred to as "racial disturbances" during that time.

But from all of this, Alford says came some good.

He calls it an awakening of sorts.

Holding positions as front desk clerks at area banks and hotels, rather than serving as maids and bellmen.

He says it took an ugly past to build an optimistic future.

Besides presiding over his church, the Bishop also owns Alford's Mortuary on the city's west side.

He was the first black person to lead the Funeral Directors Association for District Two in the early 70's.

In 1956, as a high school junior he was the also the first black person hired at the St Joseph County Library.