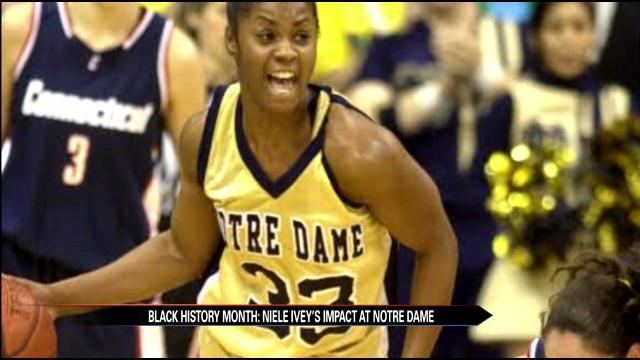 In 2001, Notre Dame won the national championship in  for the first time.

The Irish beat Purdue 68-66, in a game that will live in history.

The win was led by then point guard, Niele Ivey.

“To go through so much adversity, and then to come out on top and win the first national championship as a point guard, to me, was one of the biggest dreams come true,” Ivey said.

That dream, she said, began in the 4th grade.

“Going to the park, watching them play. Going to their high school games. That's where my love kind of came from,” she explained.

Years passed and her love for the game grew stronger.

In 1996, Ivey enrolled at the University of Notre Dame to play college basketball.

But her freshman year brought its set of challenges.

But she was back on the court the next season.

And by her senior year, Ivey led the Irish to its first NCAA Championship.

“To be able to come back from that and win a national championship for the first time in this program's history, it's pretty much, you kind of solidify yourself as a legend because no one's done that before,” said Ivey.

Shortly after, Ivey fulfilled another lifelong dream when she was drafted to the Indiana Fever.

“I knew I wanted to stay in the game in some capacity. But you know when the WBNA came along that was a dream of mine. I really wanted to play,” she explained.

Ivey played in the WNBA for five years.

But in 2007 she decided to come back to the place where it all began, to coach the Irish women.

“I just have a passion for basketball and a passion for Notre Dame. So it's the best of both worlds. I get to be around the program that gave me so much. Around those girls.”

It is her 8th season as assistant coach of the women's basketball team.

When she isn't developing point guards and recruiting new talent, Ivey is focused on another passion of hers.

“Besides shopping. I enjoy my son. I'm a mother. I have a 13-year-old son that just turned 13 a couple weeks ago,” Ivey said.

Her next goal is to win another national championship, this time as a coach.

And she wants to continue to serve as an inspiration to college athletes everywhere.

“This is kind of the way that I'm giving back to the program, the university that's done so much for me,” Ivey said.